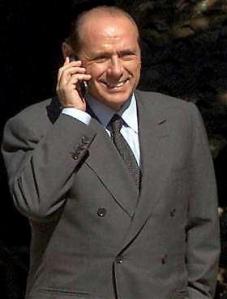 Berlusconi is accused of making raunchy calls about his glamourous minister
Berlusconi’s comments were supposedly about CarfagnaJohn Follain in Rome
Italy’s billionaire prime minister, Silvio Berlusconi, is pressing ahead with a law to ban the publication of taped telephone calls, after being swept up in a new scandal over his attempts to find parts on state television for budding young starlets.

According to reports in the Italian press last week, Berlusconi was heard making spicy remarks in a series of calls recorded by prosecutors in Naples during a corruption inquiry.

The transcripts have yet to be leaked but they are said to include “inappropriate” comments by the perma-tanned Berlusconi, 71, about Mara Carfagna, the 32-year-old minister for equal opportunities and the most glamorous member of his cabinet.

Prosecutors in Italy frequently use telephone intercepts to gather evidence that is subsequently leaked to the press. Berlusconi, who has waged an open war with the judiciary for years, is determined to clamp down on the judges, whom he calls a “cancer” on democracy.

Related Links
Berlusconi given immunity
Berlusconi calls judiciary ‘cancerous growth’
New law passed ‘to save Berlusconi from prison’
The new law, expected to come into force within weeks, will impose drastic limits on wire taps and the publication of their contents. Journalists will face up to three years in jail for publishing phone intercepts before a trial begins.

Last week a senior ministerial aide said the contents of the latest Berlusconi tapes were “hardcore”, but she added: “We’ve all had that kind of conversation on the phone, what’s so special?”

According to the newspaper La Repubblica, the tapes feature raunchy comments by the prime minister about Carfagna, a former model and television showgirl. A remark by Berlusconi last year that he would “marry her immediately” if he was single prompted a public letter of protest from Veronica Lario, his wife.

Also reportedly mentioned in the recordings are Maria Stella Gelmini, 35, the education minister, and Michela Brambilla, 39, an entrepreneur and junior minister for tourism. None of the three has commented on the reports. An official close to Carfagna said she was “as calm and sure of herself as ever”.

Berlusconi is prone to pouring his heart out in a torrent of late-night telephone calls. Even the staid Corriere della Sera newspaper described the prime minister’s mobile phone as becoming “red hot” at night.

Initial extracts from 280 hours of taped conversations by the centre-right Berlusconi, published late last month, showed him pressurising Agostino Sacca, head of drama at the state-owned RAI broadcaster, to give parts to several attractive young actresses.

In one exchange, Sacca promised Berlusconi that he would find work for Elena Russo. Berlusconi tells him: “If you can do me this favour, it’s as if you’re doing it for her. But you’re doing this favour directly for me.” Berlusconi also described the actresses and female dancers whom he admires as his “little butterflies”.

The Naples investigation focuses on suspicions that Sacca favoured actresses championed by Berlusconi in exchange for a promise that the prime minister would look after the television executive once he returned to the private sector.

Antonio di Pietro, a former prosecutor and now the leader of the small centre-left Italy of Values party, accused Berlusconi of being a “pimp” who is “busy finding work for showgirls” rather than playing the role of a statesman.

Massimo Donadi, a senior MP for the same party, referred to the notorious White House sex scandal when he asked: “What if Bill Clinton had made Monica Lewinsky secretary of state in his administration?”

However, the prime minister, known as “the Great Communicator”, then cancelled the interview, preferring to issue a terse statement instead. The government had worked hard in its first two months, he said. He added: “I don’t believe it is either opportune or fruitful to intervene on topics proposed by [the programme] – justice and telephone taps – which would overshadow the many things done by this government.” Berlusconi still faces a number of legal hurdles. A judge is due to decide on Wednesday whether or not he and Sacca should face trial. If so, several thousand phone intercepts will be made available to their lawyers, which in Italy often means that evidence is leaked to the papers.

Beatrice Lorenzin, 37, an MP in Berlusconi’s People of Freedom party, complained about the gossip in the corridors of parliament: “The atmosphere is unbearable, the place is like Big Brother, all gossip and rumours. It all stinks of blackmail.”

Camilla Ferranti, a soap opera star, was one of the few actresses to rally behind Berlusconi: “He is a person of great sensitivity, very generous, who likes a joke. His behaviour is innocent. He appreciates beauty, like many other people.”